Every younger sibling harbors an ugly little secret. We are all born with a vein of evil running through us that is completely dormant until our older sibling may get in trouble. A few decades ago mine began to fill with wicked adrenaline as my mother told my brother, Tobin, to clean the kitchen yet floor again.  We had been making candles when he spilled red wax on the orange floor.  It was around Tobin’s fourth attempt that my mother went in again to check the progress. She found my brother hard at work, cleaning a completely different area of the floor.

“Why are you cleaning there? The wax is over here,” she said.

Tobin looked at the spot and then at our mother.  The spot was as clear as day, but he remained completely baffled.  Just like that, the rush was over.  No one was getting grounded.  My brother was just colorblind.

I say, “just,” because that is how people treat color blindness.  It is taken about as seriously as an unfortunate birthmark on a big toe.  How much could it really impact one’s life?  Well, first of all, people will do things like hold up something red and ask the person to name the item’s color.  Seriously… stop doing that.  A colorblind person will tell you that it is red, because that is the red that they know.  1 out of about every 12 men has some form of color blindness, as does 1 out of every 20 women.  The most common form being red/green blindness.  (I once totally forgot and made Tobin a red and green scarf for Christmas.  Oops.)  Anyway, that would be a large amount of the population needing to drive around all day looking for a Target or not knowing if their shirt was upsetting neighborhood bulls.

So, here is the most scientific thing that I am ever likely to write: Color-blindness is the inability to distinguish the differences between certain colors. This condition results from an absence of color-sensitive pigment in the cone cells of the retina, the nerve layer at the back of the eye.

In essence, Tobin could see the candle that he was making, but not the red wax against the floor that was a different shade.  Here is a quick test: 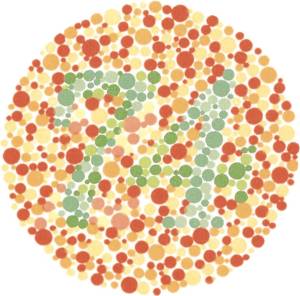 You were supposed to see a sailboat.  Did you?  Just kidding.  I had you there, didn’t I?  (You are supposed to see the number 74.)  As it turned out, color blindness was a problem for Tobin.  We came from very artistic parents.  I wanted to believe that it skipped a generation, but it didn’t.  It just skipped me.  Tobin loved making art. However, to say that his talent was genetic, doesn’t give him proper credit.  He wanted to be an artist and he worked at it.  Sometimes his art made him a dangerous roommate.  I remember a time when Tobin discovered splatter painting with water colors at his desk.  Water hit his desk lamp and the bulb exploded, sending shards all over the room.  I’m not sure if Jackson Pollock ever had that problem, but some words of advice to any ladies out there who tend to fall for artsy types, “be ready to duck.”

As Tobin’s skills progressed, he began mixing paint using a color wheel.  This is about the equivalent of using the Dewey decimal system at the library instead of being able to Google something.  However tedious, the end result was worth it, as you can see from one of his pieces here. 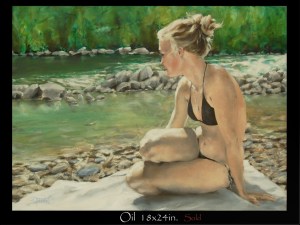 You can see more at www.tobinrodman.com.  (shameless plug.)

I often wonder if it is a shame at all that Tobin can’t see his art the same way that I do.  Recently, these cool glasses came out that allow the color blind to see colors. 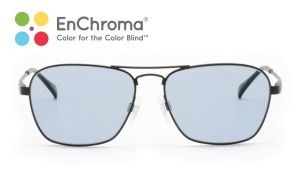 I asked my brother if he would want some, but I imagine that the change would take some getting used to. The point is, something was hard, but it was worth doing.  In my opinion, if something is hard, that is exactly the time when you know it is worth doing.  We simply need desire and the correct tools.  As for me, I inherited a challenge of my own.  It involves my height.  My desire is a cookie from the top shelf.  My tool is a step ladder.  The struggle is real.

Hmmm… I see you are still sitting there, not creating anything except for a tushy groove in your chair.  Perhaps this video will help.  You may actually enjoy it, but I am mostly posting it because little sisters are jerks.