We have all seen him. Maybe he was walking through the plumbing section of a Home Depot, holding on to the side of a cart, dressed in a tattered storm trooper costume. Maybe he added rain boots or a tutu to complete the ensemble.  Halloween has been over for months, but he can’t let it go.  Kids grow out of this sort of thing, don’t they?  Truth be told, in some cases, they are just growing into it.  Is that a bad thing?  Well, not according to members of the 501st Legion.

I first learned about the 501st. when my Palawan was invited to the Sacramento Intergalactic Con, to take part in a Good Day Sacramento morning show taping. There we were, attending to Jedi business, when we were swarmed by stormtroopers and sith.  For my son, there was only one way to handle the situation…. 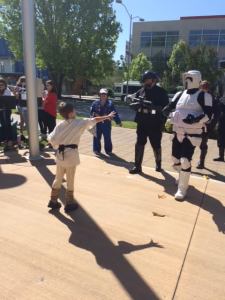 Don’t worry, I called him off and he let the bad guys through.

However, in between taping we chatted with the troop and my kid imprinted on Anakin as a baby duckling might, following him everywhere. 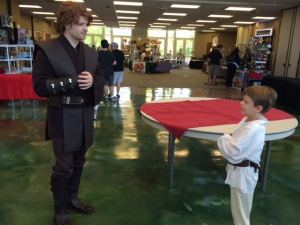 Nothing to worry about there, right?  I watched as adult children of the 70’s and 80’s thrust their younglings at the Empire for photo ops

. “I know he is the sith who blew up Alderaan and murdered all of the younglings, but don’t be nervous. SMILE for Vader!!!”     Yeah, yeah, I was guilty too.

We began following them on social media so that we wouldn’t miss an appearance.  I will admit that when I first met them, I assumed that they were just overly enthusiastic fans with impeccable crafting skills.  (I’m talking level 80 in Pinterest.)  While that may be true in some cases, the 501st. Legion is much more than cosplay.  They are bad guys doing good.

In addition to comic conventions and Star Wars Day at the ballpark, the 501st gives back to the community in big ways.  They have taken part in fundraising and appearances for such organizations as Make a Wish and Starlight Starbright Children’s Foundation.  The 501st. has been known to stop by children’s hospitals to cheer up the kids who need it the most. We went to see them at Star Wars Reads Day where the Central California Garrison  showed up to libraries all over the city to promote literacy. (It was after a great day of little league and someone special signed the game ball.) 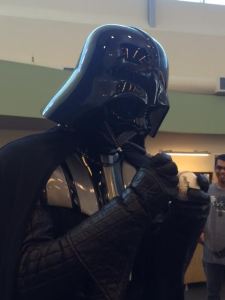 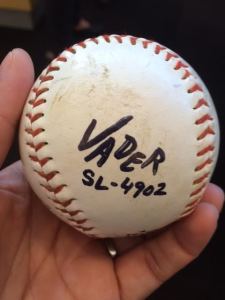 As ironic as it may sound, these bad guys are also very anti-bullying and have supported the cause in many ways including being part of an anti-bullying initiative called, “Heart of the Force.”  And here is the kicker, folks… they don’t charge a cent.

So, I know that this just sounds too good, like maybe the Dark Side is trying to seduce you.  Well, if the Force is strong with you, consider joining the good guys at the Rebel Legion.  (Same idea, less chance of being Force choked.)

We look forward to many more events in the future.  RaisingJedi thanks you for all that you do while spreading the love of Star Wars! 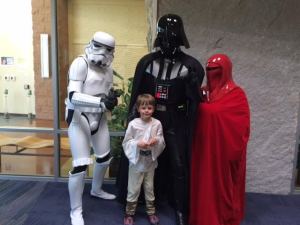 For more information on joining or requesting an appearance, check out these links!