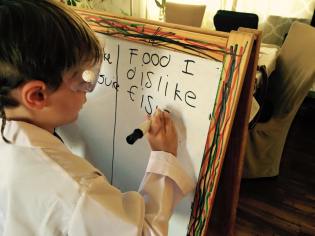 Me: “Are you going to try turkey on Thanksgiving.”

Me: “Well, Aunt Jennifer is making Tofurkey. It is like pretend turkey.”

“Selective eater.” Yeah… that is a nice way to put it. I recently had an ABA therapist, tell me that she never loses behavior battles. She did, however, give one exception… food. You will receive advice about this one all day long and it will always be the same thing. “If he gets hungry enough, he will eat it.” Maybe so with some kids, but with kiddos on the spectrum, sometimes you just have to wave the white flag and do the best that you can. The sensory aversion can just be stronger than the hunger.  I have littered this post with pictures of my attempts at being creative with food.  Most met with rejection. 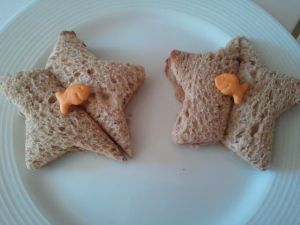 I can’t tell you how many people have given me books about clever recipes to up the nutrition in some kid friendly foods. Just chant to yourself, “They mean well…. They mean well.” Let me just share some of these suggestions…

Swap mashed potatoes with mashed cauliflower: How did this ever get published? Yeah… no one will EVER notice that the mashed potatoes now smell like feet. That being said, I still can’t get the kid to eat potatoes, and they are full of delicious booty expanding carbs! This is a great source of shame for my Irish husband, who still holds out hope that when the kid turns twenty-one, he will then have a palate refined enough to enjoy a Guinness with his father.

Mix zucchini into meatloaf: Yeah, because all kids love meatloaf. “And I would do anything for love, but I won’t to that.” In this case, “that” refers to the futile effort of trying to convince the kiddo that meat can be molded into a bread shape and be palatable. Then he will not only avoid the meatloaf, he will stop eating bread.

Hide veggies under the cheese in your pizza: Okay, let us just gloss over the fact that the Boynado won’t even touch pizza. Under the cheese, really? Are you fooled when the kid hides the peas under his napkin? Didn’t think so.

I could go on, but I’m sure you get the idea. I read an entire recipe book with tricky ways to get your kid to eat healthy things, and every “kid friendly” food was something that my son didn’t think was very friendly at all. However, the idea of being sneaky and deceitful did appeal to me. Sound terrible? Yeah, how are Santa and the Tooth Fairy doing? Check your pants, parents, cuz’ they may be on fire. It is our right, nay, our duty to fib to our kids from time to time.  Ask the grandparents.  They call it “tradition.”

I have been known to pull a fast one with something I call, “ninja food.” Everything’s better with a cool name. It is called ninja food because you won’t even know it is there and then, “BAM!” you just ingested some vitamin A! One of the 4 meals that my son finds edible is the good old blue box. I puree some ninja carrots.  It works ONLY if the color is consistent. I’m only in real trouble if he ever tastes the real thing, loaded with much more delicious things, such as milk and butter. Until that day I will happily watch him unknowingly wolf down half a dozen baby carrots while rubbing my hands together and twisting my invisible mustache like the evil genius that I am. However, just as the ideas listed above, ninja food won’t work for everyone.  It is merely a few steps above veggies in meatloaf. 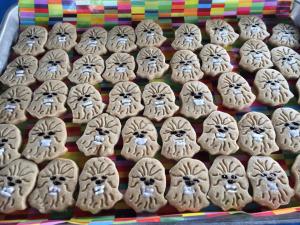 I often find myself trying to find out what exactly is so offensive about a particular food. My son gives me clues such as, “It tastes too high-pitched.” Another one, “It is too much like a volcano.” I eventually figured out that, “high pitched,” means tart. I thought that volcano meant hot, but it turns out that it means that the food tastes like vinegar. (We would make baking soda and vinegar volcanoes in the backyard.) Yeah… THOSE he would taste.
So, if all of that well-meaning advice is no good, what could I possibly have that is any better? Well, I want to tell you it gets better with time. People tell me that, but I don’t honestly know. What I do know is this… It does us no good at all to get sucked in by guilt. Stop looking at those perfect bento boxes filled with low-fat, high protein, zero GMO, gluten free goodness on Pinterest and feeling bad that your kid just ate a can of Pringles along with exactly seven raisins placed neatly in a row. Sometimes it takes a lot to make that raisin thing happen, I know. It is between you and your doctor to handle the health of your child. The judge of that should not be the little miss yoga pants and coconut water, side eyeing your grocery cart. The long road of parenthood is lined with billboards, all telling you that you are doing it wrong.  Trust yourself.  Know when to push, and know when to pull back.

One more thing.  I know your secret.  I know that you fantasize about taking your kid to a casual dining restaurant and watching them gobble up food that was not painstakingly prepared by your loving, yet weary hands.  Do yourself a favor and don’t hate those who make it look so easy.  Comparison will kill your joy. What joy, you ask? The joy of knowing that their bill will be much higher than yours since you played sherpa and smuggled in a full can of Pringles and seven raisins. 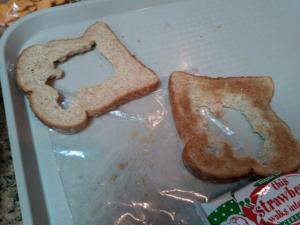 Well, that is something…