I have a confession to make.  I, Rebel Mom, am an internet junky.  Cat videos, love ‘em.  Social media trends, sign me up.  I even love me some political rants.  Don’t even whisper the words, “unplug,” in my presence.    If you do, I swear that I will go straight to my Amazon Prime app. and order myself some earplugs, because I’m not trying to hear it.

So, I suppose that I have a second confession.  Much of online world remains a mystery to me.  For instance, how do things go viral?  I mean, where do these things originate?  Is there some magic Web God just making it so?  If that is the case, he certainly does like the Kardashians.  Well, as it turns out, all of these questions got answered for me last April when my son, Colin, caught Star Wars fever….  and his very own virus.

It started simple enough.  He had a new obsession and it was all things Star Wars.  I had been down this road before and my husband and I were counting our lucky stars that Elmo’s World had left the building.  He begun with A New Hope, Empire, and Jedi, (as he should.) Then he wanted books.  He read and read.  What parent would put a stop to that?  Literacy AND quiet?  Win.  Then it happened…

He read the words, “Jedi are forbidden to marry.”  This is a huge problem for a 7 year old who has mapped out his entire life.  He wanted to spend his days protecting the galaxy, then come home to his wife and younglings.  He had midichlorians to pass on, after all! This was his first major life decision and he was struggling.

I cared, really, but after hearing about it all day everyday…. let’s just say that I was having some pretty Dark-Sided feelings of my own.  I handed him a piece of paper and a pen.  Then I told him to tell it to George Lucas.  He wrote the following: 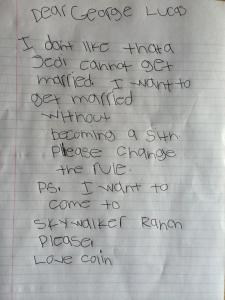 My annoyance disappeared because, come on… this is adorable.  As promised, I sent it off to LucasFilm.  STOP RIGHT THERE, STAR WARS GEEKS!  I know what you are thinking.  George Lucas sold LucasFilm, therefore would not be answering the letter himself.  I know, but give me a break.  I was hoping for a form letter that might satisfy my young Padawan.  What we got was a bit more.  Along with a bunch of toys and books, he received this letter: 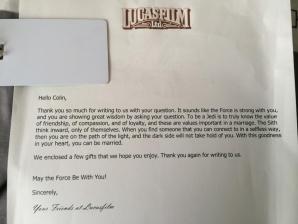 Let me tell you, when a Star Wars fan opens their mailbox and sees a package from LucasFilm, the video camera comes out.  This is the result.

Months went by without incident.  (Ok, maybe there were a few lightsaber injuries during that time, but not much else.)  Then one day the phone rings, and it is the head of PR for LucasFilm.  What could they possibly want with a slave mom from Tatooine… er… uh… I mean… stay at home mom from the suburbs?  It turned out that they still had Colin’s letter.  They wanted to talk about it to the New York Times about it and were nice enough to ask if I would be ok with that.  (The Times was doing a story on fan mail.)  We chatted for a bit and I mentioned that I made a video of Colin and his dad opening the package and I could put it on YouTube for the staff to see. The following day, the New York Times called to interview me and I did my best to pretend that I was doing something more exciting than scrubbing the toilets at the time.  The Times article was set to come out on a Friday and on Thursday a friend asked if he could share the story with a few bloggers.  In the time between saying yes and the Times coming out, my child’s wish to journey the galaxy was quickly becoming a reality.  It all started with this article on GeekDad, but went on to Huffington Post, Time, The Nerdist, Laughing Squid, AV Club, MTV, Inside Edition, and hundreds more.

My email was filling up and my house was getting dirtier as I tried to manage the madness.  Oh, and just fyi, you CAN still get into Good Housekeeping even if you house is a disaster.  Just raise a Jedi.  Piece of cake.

We even ended up doing a few local news shows…

Now, all the news was not good.  As in the wonderful world of Star Wars, there is a Dark Side.  I was being hounded by companies asking me to sell the rights to the video.  My Facebook page was hacked for pictures, and interviews were posted that were completely fabricated, and let’s just say that some science fiction fans do NOT like their favorite stories messed with.  (Apparently, the wifi is getting better and better in their mom’s basement.  Yeah, I said it.)  There were moments when I considered taking it all down.  Then my friend, Mike, alerted me to something that he saw while following the story on reddit.  It was this comment:

“I’m beaten down by life, fairly hopelessly, battling away at incorporeal enemies like health, bills, and depression, so much of me detached from the smaller and simpler person I once was. I’ve buried a hundred versions of myself in a graveyard of my mind.

And yet here I sit, tired and sick and not even sure if I’ll make it to The Force Awakens, and a two-minute video of a child getting dollar store-level merchandize in a nondescript brown envelope punches through the veneer of adulthood and brings me all the way down to his level… and for just a single minute I’m mindlessly happy again. It’s Christmastime and I remember how great it felt.”

I sat there for a moment.  When that video created a life of it’s own and took off, I never considered it anything other than my child’s 15 minutes of fame.  I got more and more comments like this one and I realized that this meant much more to me than just being our flash in the pan.  When Colin was diagnosed with autism, I was afraid that the autism was all the world would see. No one would ever see him as I see him.  No one would notice his constant state of wonder and enthusiasm for life, but there it was in black and white.  Colin’s autism was not included in the launch of this story.  It was all about him, and he was making the world smile.  Someone once told me that someday I would Google my name and the results would show, “Mother of Colin,”  and it does.

I think that if the most noteworthy thing that I ever do is to raise a child who sets his sights on changing the galaxy, then I think that I can call myself wildly successful.  Although, the job may never be done.  After all, someday there may be grandchildren.

Note: Raisingjedi would like to thank a few people on this, our launch day.  These people have had a hand in spreading Colin’s story in a charming, clever, and respectful way.

Cody Stark and the lovely people at Good Day Sacramento

Lynn, Cara, and the staff at LucasFilm (The tour was great!)

All of my friends and family who shared the story with love and enthusiasm.  Thank you for staying on the path of light and may the Force be with you! 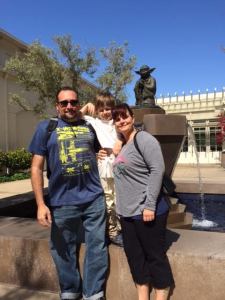