“Follow your passion.” That is what we are all supposed to do. Well, what if your passion is built around a work of fiction? Does that mean that we should abandon it once we get, “too old?” The longer I follow my son down his passionate path, the more I realize that the answer is no.

This weekend we attended one of my son’s favorite events, The Intergalactic Expo. Last year he was a bit of an internet celebrity because of his YouTube video and he got to open the Expo by conducting the orchestra on Good Day Sacramento. This year our plan was going to involve much less excitement. So much for that idea.

When I say that Star Wars is my son’s passion, I mean that he has been passionate enough about it to spend well over a year growing a Padawan braid. I had been getting hints that he was ready to cut it, but he would never let a mere Rebel Mom handle such a task. So, I reached out to the Strafe Plains Temple, a sabers group attending and performing at the event. I asked if anyone would just be able to tell my son that the Force was strong with him and hack off the braid. They took the idea and ran with it, even gifting him an amazing saber made by Ripper Sabers.

Before having my Youngling, a work of fiction was just that. Now I know that it can be so much more. It can be lessons, wisdom, and acts of kindness. Where some might see a bunch of people playing dress up, I see people sharing what lights them up. They share it with children, like mine. Events such as this Intergalactic Expo, benefit charities like the Make-A-Wish Foundation. These groups make them special. Seems like a true to life heroics to me.

From the bottom of our Rebel hearts, RaisingJedi would like to thank the following:

The staff and volunteers at Intergalactic Expo

May the Force Be with you! 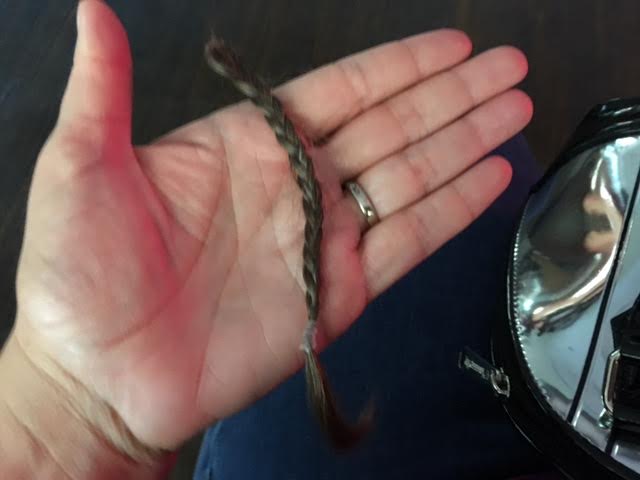 Bye bye braid. You will look great in the baby… I mean Youngling book.