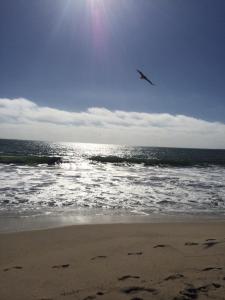 The weather app. on my phone had clearly stated that is was going to be cold and windy at the beach that day.  I was now sitting on my sweatshirt and rolling up my yoga pants to keep from dying of heatstroke.  A group of college girls walked by in bikinis.  I rolled my pants back down, consoling myself on the fact that, much like a good bearnaise, a body can thicken with time.  It was the end of summer and we decided to squeeze in one more beach day.  I watched the pelicans fly high up in the air, fold their wings in, and drop into the water.  I thought of how my own bones would shatter on impact, but the birds were designed as to not be hurt by the drop.  Sometimes they caught a meal, sometimes the fish were the lucky ones.

My five year old son wasn’t watching the birds, he was watching the waves and my husband took his picture.   Next to us I saw a young man of about 15 rush the waves.  He let out a startling screech and his bright red hair ignited under the afternoon sun.  His mother was close behind with her chair and tote bag.  She was clearly more prepared for the day than I.  She actually packed a swimsuit.   Her skin had seen it’s share of UV rays and childbirth.  Her hair had a lovely tone of caramel that had been salted with grey and it whipped around her face in the wind.  Her son tumbled into the water over and over, flapping his arms, humming and screeching.

“I hope he doesn’t bother you. I realize he can get a little loud.” she said with a slight Spanish accent.  I gestured to my own son whose arms were flapping so much that, had he been winged, he could have met up with the pelicans.  This mother and I exchange the smile that passes for the special needs parent secret handshake.  We started chatting in the language of the ASD parent about IEPs, ABA, OT, ect…  We watched our boys.

“Does he speak?” she asked me.

I felt a tightness in my chest just thinking about the years before Colin became verbal.  I worried for him, of course, but I also lived with a selfish dread that my child would never be able to tell me that he loved me.

As if reading my thoughts, this woman said, “It is ok.  I know how he feels.”

People walked by, and for once it was not my son drawing the uncomfortable looks.  With every sideways stare or look of disapproval, my jaw would clench and my fist would ball.  She noticed them, I’m sure, but her hands hung relaxed over her arms rests, and she sat with a gentle smile.

There were times that I said what I was supposed to say, because it is what a good mother would say.  Sometimes it was just words.  Sometimes I went through the motions.  If she ever felt that way, it didn’t show.  Maybe it was as easy as deciding that the truth is, “It is ok.”  All of it.

Her son fell into a laughing fit while being tossed around the surf.  Her gentle smile broke into a full grin, engaging years of laugh lines.  She ran at him and they began splashing each other.  Droplets of water hung in the air, catching the sun and surrounding them in a spiral of diamonds.

I don’t know where those college girls went off to, but it didn’t matter.  There was a new, most beautiful woman at the beach, and I could not take my eyes off of her.