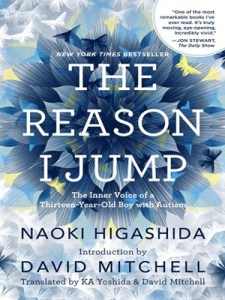 For some reason, people tend to associate the ability to speak with intelligence.  It seems that we should know better by now.  Evidence to the contrary can be found while watching many a political debate.  Another great example can be found within the pages of, “The Reason I Jump: The Inner Voice of a Thirteen -Year- Old Boy with Autism.”  by  Naoki Higashida

Originally in Japanese, and translated to English, this book is set in the form of an interview.  Thirteen year old, Higashida, is non verbal and communicates with the use of a special alphabet grid.   Although it is an incredibly quick read, this is jam packed full of insight.  This young man is so eloquent and honest when faced with such questions as, “Why do you line up your cars and blocks?” Or, “Why don’t you make eye contact?”   He paints such vivid picture that the read becomes a true sensory experience.

Higashida does answer the question, “What is the reason you jump?”  I won’t spoil it for you, but as the parent of a jumper, it made my heart skip a beat.
I give, “The Reason I Jump,” a Force score of 9.5.  It would have earned a 10, but I still had about a million questions that I was dying to ask at the end.