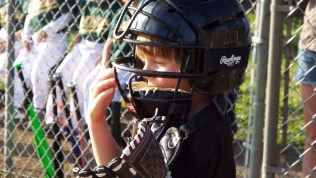 We just wanted some sleep.  Our son had slept all day, due to a fever, now it was midnight and he was wide awake.  To keep him on the couch, my husband put on something that could not possibly overstimulate him… baseball spring training.

We were never a sporty couple.  We never wore matching jerseys.  The only time that we ever yelled commands at the television was when Netflix wouldn’t load. Big game days simply meant it was time to hit up an empty Home Depot.  So, we were completely unprepared for what happened when we woke up.  Our son, Colin, had become a baseball expert overnight.

We were used to Colin getting super focused on one topic.  It is kind of part of the autism package.  Soon stats and rules were not enough.  He wanted to play.  He begged us to join little league. Usually families would consider baseball a rite of passage, but for us it was terrifying.  His social skills were lacking, he had motor delays, and zero attention span.  Would it even be safe for him?  How would the coaches handle him?  We had put him in autism social groups up until this point.  What was the point of all that if it wasn’t to help him be social in real life.  So, I held my breath and signed the papers.  Colin was a Giant.

We bought the jerseys and sold the chocolate bars.  We worked the snack bar.  Lord help us, we even watched the World Series.  There were a few snags along the way, but manageable snags. Thanks to some patient coaches, and teammates, it turned out to be a very positive experience.  It was clear that, what he lacked in skill, he made up for in entertainment.  He loved the TV commentators and would yell, “Did you see that, folks?  It’s a pop fly to right field!,” as the team yell, “Colin, you are in right field!  That is yours!”  He even learned a whole lot of sportsmanship as shown in his fan mail to the one and only Buster Posey. 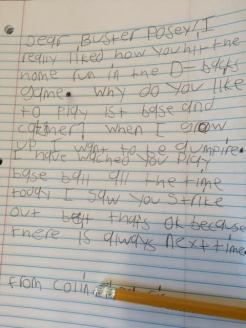 As he gets older, I realize that things will change.  We enrolled him in fall ball and it is clear that, gone are the days of calling a timeout because the second baseman has to go potty.  It is less about having fun and more about gaining skill.  The kids can throw, and hit.  Well, some of the kids.  I watch as parents criticize, yelling, “Get your glove on the ground.  What is wrong with you?”  I’m just sitting here pumping my fists every time he remembers where right field is located. 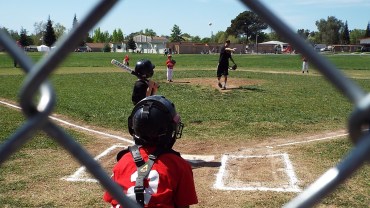 Every time he strikes out, it is with a smile. As he wrote in his letter to Posey, there is alway next time.  He cheers for his teammates. They repay him by tucking their feet under the bench when in the dugout so that he can stim back and forth like a highly caffeinated tiger.  If there are too many kids, he is usually the one left on the bench, but he doesn’t mind.  He just cheers or practices his serious umpire face.